Things to do in your first week down under

So here I am. After 36 hours of travel combines of car, plane, plane, plane, train and bus I landed at 11pm in the middle of Surfers Paradise. I’m scared of spiders (I’m looking around all the time) and other creatures which want to kill me, but excited as hell! I’m on the Esplanade, I don’t know yet, that this is one of the main streets in Gold Coast, because now it’s quite empty, as it’s middle of the night, in the middle of the week, in the middle of october. I’m for the first time in Australia. I’m for the first time on the other side of the globe, what’s even more important. I quit my job in Poland, I moved out from my flat and took all my stuff to parent’s house, I made a bye-bye-party for friends and finally came to Australia, after months of thinking about it.

So I’m sitting on the Esplanade, waiting for my couchsurfing host (I love the idea of couchsurfing!) which I’ve found for first few nights, and thinking what to do first. On my to-do-list is:

Searching for the room I started already in Poland, on gumtree and flatmates.com.au, and happily I arranged one meeting with potential flatmates for my first day in Australia. And you know what? It did work out, I rented the room, just 50 meters from the beach, with great flat mates. Exactly how I wanted to. So, one the main things I was worried about was done, perfect! 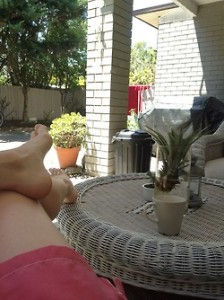 On one hand unknown cities are great , because you can explore them, but on the other hand it’s always a little bit overwhelming, because you don’t know anything about them. That’s why I wanted to buy a bike at the very beginning. To be able to move faster and to see more than from a bus. I searched on gumtree as well (after three days in Australia you can see, that everyting you need, you can find on gumtree and everyone says “check on gumtree”). Finally I got one from the shop with used bikes in Southport, I felt in love with this bike at the first sight, because it was vintage, in european style and cheap. Exactly how I wanted to. Again! 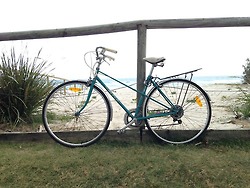 Third thing – going surfing, not less important than the other. I came here for surfing (since I was child I was wondering, how it’s practically possible to surf, it looked so impossibly). I mean, I really came here for surfing, because I’m holding student visa, and I’ll attend International Training College, on surfing course. Which is pretty cool, because I really wanted to find a course, which will be exciting for me. I had only one surf class before, it lasted 4 hours and as you can imagine, was mostly about trying to stand on the board. Trying… But the moment I felt the first wave was one of the best moments ever. Then I decided to continue on surfing. It was 2 years ago. I really didn’t know then, that the next time when I’ll surf, will be in Australia. It was like a great dream for me.

And now I’m here – in Coolangatta, early in the morning, I came here with my new, brazilian friend. I’m lying on the board and wondering how it happend. In Poland it’s now about 5 degrees and I’m in the ocean, in the middle of Australian east coast.

It’s exactly how two years ago – I’m trying to stand up, and it doesn’t matter that it’s not working out. I’m here, exactly how I wanted to. I have a flat, I have a bike, I’m surfing. The big adventure starts now!