Yeah, before I found out, that it’s actually possible to study surfing in Australia and get student visa for it, it seemed totally unbelievable. So when someone asked me “Ok, again, what will you study?”
I explained, that actually it’s a college and “A certificate in Sport and Recreation”, with elective surfing class, even if it still sounded ridiculous for European standards… But what is funny, I was sure that in Australia no one will be surprised about “studying surfing”, but even here it doesn’t seem to be very popular thing to study. So, I had to be very lucky to find this one! Before my travel I was even wondering if it’s  a fake, that maybe I didn’t understand something right, but after my first four classes, I’m sure it’s not a fake! Moreover, it’s the best course I could have chosen.

During the week we have 8 hours of practical classes, divided into two days. Depending on the weather, we meet on different beaches, early in the morning. So far we were in Burleigh Heads and in Palm Beach, but often classes are on Spit as well. Because new students begin their course every Monday, our beginner group consists of students on various levels, what is great because you see the progress and can learn from others. First class started with swimming test and gaining basic information about the surf board and how to stand up on the board. Then, finally, we started to actually practice it. The waves were not too big, but of course for me they seemed huge, even if we were catching only these broken ones… You can’t compare to anything else the feeling of the first caught wave, even if it’s broken one, even if you finally stand on a soft board which is as big as your front door and even if you immediately fall from it. It’s the best. It empowers you to try again and again. It’s an adrenaline shot. It’s… ok, it’s just great! Every next lesson is even better, I haven’t been so excited about going to school for a long time. Actually, I haven’t been so excited about going to school, since the day-before-my-first-school-day when I was 6… 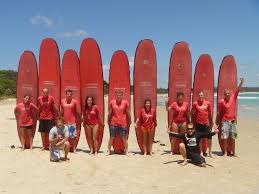 So, it’s how the classes look like – we meet on beach, do some exercises, and then we go to the ocean. We have two instructors, as the group is quite big. One is usually going with more advanced students farther from the shore, to try catching the unbroken waves and the second stays closer to the beach. Sometimes we have some additional classes, like first aid, or rescuing unconscious people from the ocean, but mostly we surf during these 4 hours. For the first two weeks every student can use the instructor’s soft boards, but then should buy their own board. And for me it’s just now, I’ve got my first surfboard just 4 days ago (of course, I’ve found it on gumtree, beautiful, isn’t it?:)) and had my first class on it yesterday. Because it’s not a soft board, and it’s smaller (a bit..), everything is like learning from the beginning. But the fun is still the same.

Except practical lessons, we have some theory as well, we work on various work books in school campus, which is not so fun of course, but I can imagine, it’s necessary. We have very flexible timetables what is really great.